Growing up & Showing off

Kaitlyn & Seth were both born into Christian homes. Seth grew up in Venezuela as a missionary kid, and Kaitlyn grew up in Pennsylvania as a regular kid.

In 2006 Seth’s family came home from the field and settled back into their home church. Every Wednesday night the youth group met and studied through the Bible chronologically. They started at the very beginning in Genesis and watched God’s story of pursuing mankind all the way through to the life and death of Jesus. 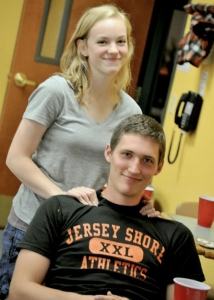 Then in 2008 Kaitlyn started coming to the same youth group. Sitting under that teaching ended up being key in her growth. She began to find answers to her questions through the truth of scripture. She found a community of people to belong to, and she found new hope in Christ. It was also during that time that she started to see the need for the gospel around the world. Through scripture and connections with other missionaries, the Lord began weighing down her heart with the reality of the lost. Somehow she wanted to be involved in bringing the gospel to people who have never had a chance to hear.

After all the serious stuff was done each Wednesday, like every good teenage boy, Seth commenced to showing off!

She was impressed … so they started dating!

Seth left for Bible college in Wisconsin, and they began the long distance relationship thing.

He had always wanted to be part of missions, but during his time in Bible school, he really found the clarity as to the WHY. God has been pursuing mankind since the very beginning, and he was starting to see how he could personally join Him in reaching people around the world.

Then one day … they tied the knot and got married!

They lived in Wisconsin for a couple more years while serving on staff at their church. Then in 2014, they headed down to Missouri. They spent the next two years training for cross-cultural church planting with Ethnos360 (formerly New Tribes Mission). 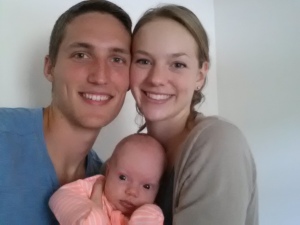 During their time there they were trained in some practical skills like: missionary technology, language learning techniques, culture study methods, and discipleship principles. They got to put many of those skills into practice in different workshops, cultural practicums, and ministry opportunities that allowed them to live out what they had been thinking through.

During their first year in training, Natalie was born!
She was bald … and pretty cute.

During the years leading up to training, Seth & Kaitlyn became very close friends with Luke & Ellenie Hodgdon. Throughout their time in training the Lord confirmed over and over that He was leading them to pursue working together. They did life together, learned side-by-side, served as teammates, and had fun as friends. It’s an exciting thing for both families to be part of God’s mission alongside their closest friends.

Luke & Ellenie have two boys:
James is the same age as Natalie, and Noah is a little older than Lauren.

The trip to PNG

Halfway through their two years of training, Luke and Seth took a trip to Papua New Guinea. During those couple of weeks, the Lord confirmed that Papua New Guinea would be a great fit for their families to serve. They purposefully connected with the national church as well as Ethnos360 field leaders in the country.
The picture above is of Luke and Seth with the elders of a church among the Siar people. The men and women in that body of believers are growing every day as they follow Christ in the context of life in Papua New Guinea.

Throughout the week in the village they extensively discussed a variety of things with the church. During a series of discussions about reaching other language groups in their region, the elders asked Seth & Luke to come back with their families and join them in reaching another language group with the gospel!

That was a surreal moment for the two “missionaries in training”. The reality of the desperate need for the gospel sank deeper into their hearts. The Siar church is already taking the gospel to other people groups, but there are places that are simply too far away for them. They have limited resources to plant & sustain a church in areas that are out of their reach. That’s where teams from Ethnos360 can play a part and join them.

The last night that the guys were there, the church prayed for them and commissioned them to join in the task: the task of taking the gospel to people without hope and without access to the truth. They’re convinced that it’s worth it…and so are Seth, Kaitlyn, Luke, & Ellenie.

After finishing their training in the Spring of 2016, Seth & Kaitlyn moved back to their home area in central Pennsylvania. They began an intimidating journey of trusting the Lord to build a team of generous people who would help them get to Papua New Guinea. That team of people would also be the ones to make it possible for them to stay there long term.

The Lord arranged for gr 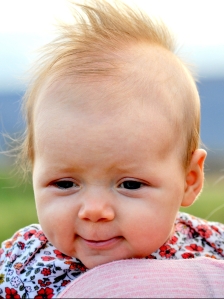 eat opportunities to connect with people and churches all over the country. Through those friendships & through a lot of extremely generous people, the Lord provided all of the financial support that Seth & Kaitlyn needed in order to effectively serve among an unreached people group in Papua New Guinea. Their team consists of over 60 individuals/families and 12 churches!

During that year and a half, the Lord also gave Seth & Kaitlyn a healthy, vibrant little girl named Lauren. Like her big sister, she was pretty cute … but unlike her sister she had a little more hair.

A new Life & Ministry in Konomala

January of 2018 marked the beginning of a new chapter for Seth & Kaitlyn. It’s a journey to see the Lord eternally change the destiny of a people who have never before had the chance to hear the truth in their own language. The journey will be difficult and long … but they’re convinced that it will be worth it!

They are now living in a community of people who speak the Konomala language. They are learning the language and culture of their friends in Konomala with the ultimate goal of making disciples and seeing a church established.